We moved into our home about 9 years ago. The house was built in ’67 and our ‘new’

home looked VERY dated. Old wall paper, gaudy plastic light switches, etc. Anyway, the foyer (the first place you see when you enter our home) had a skinny, black, wrought iron banister for the staircase. I don’t like what these look like mounted on cement steps outside the home much less inside my foyer. I’m a cabinetmaker and I’d like my home to be a well made, older structure …built with care and craftsmanship (something that we see less and less ‘these days’).

Although not a stair builder per say, I wanted a balustrade (that’s the handrail and all the vertical posts) to be rich and substantial …. and made of wood.

(For clarity, I’ll define some terms here. The major upright posts that sit at the bottom or top of the stairs and at any landings are called ‘newel posts’ and the smaller spindles that rise from the steps are called ‘balusters’. )

For months I thought of what I could fabricate and what it would make sense for me to buy considering my time and cost (and the fact that we don’t do any lathe work in my shop).

There is a huge flea market 20 min. north of us that has a section of sellers that deal mainly with antique furniture, salvaged architectural details, etc. As luck would have it, a woman running one of the booths said she had three cardboard boxes in the back of her truck of parts to an old staircase railing salvaged during the demolition of a large, old estate. When I started to drag out the contents, I found a large, turned newel post, a few lengths of wide handrail and (what must have been) 35 ornate spindles. Everything except the handrails had been painted. The handrail was made of walnut that that was wonderfully darkened from being handled for many decades. I talked her down to a hundred bucks and took the cartons home. I stripped the big newel of all it’s paint and found it also made of a single piece (no seam) of solid walnut. That must have been some walnut tree cut down in the late 1800 / early 1900’s.

Among the hand rail, I had sections that turned left and right, some up and down and that section where the hand rail joins seamlessly with the cap that sits on top of the large newel post at the bottom of the stairs. 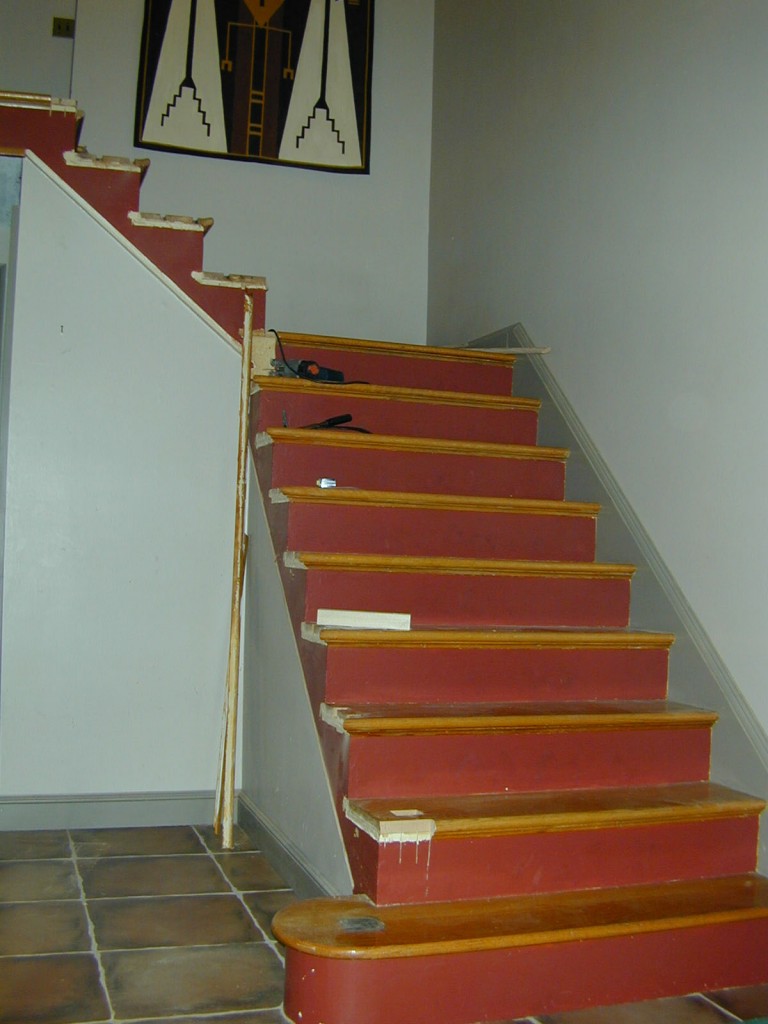 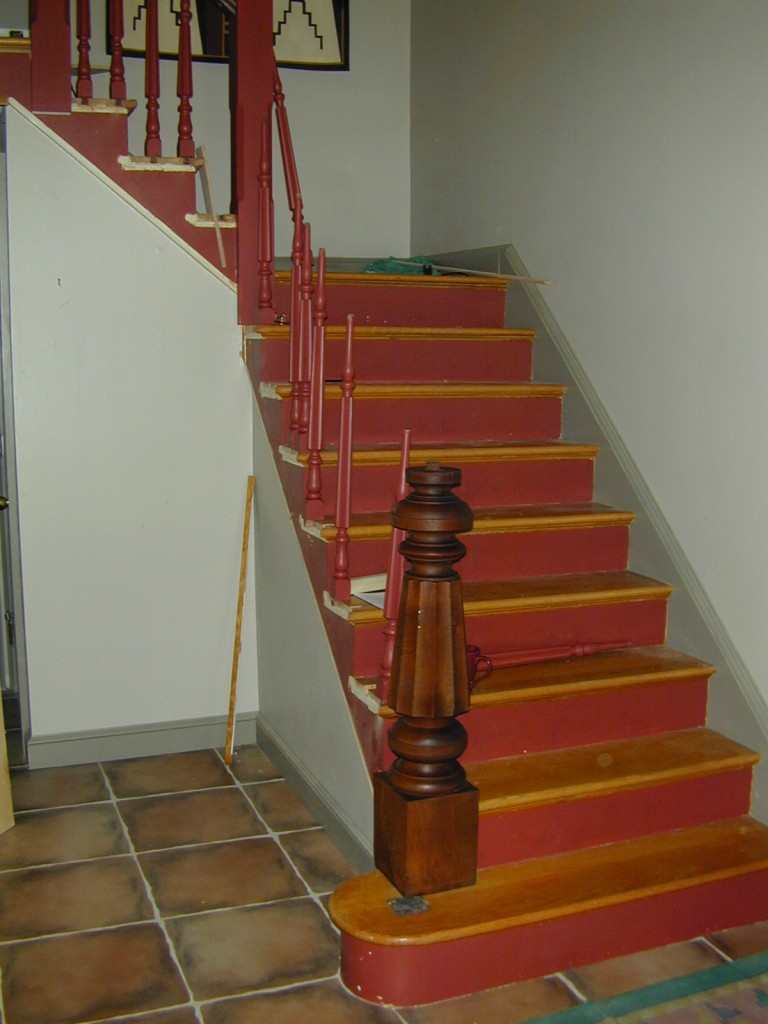 For those of you who are woodworkers……..

On the bottom of each baluster (where they rise from the steps) was a dovetailed tenon. This dovetail was to be inserted into the ends of the treads where a dovetail mortise was routed and the tread’s end cap is then reattached to cover the join and end grain. The top of the spindles were simply rounded at the top to sit within holes drilled in the bottom of the handrail. The dovetail joints make an incredibly strong railing. (I can’t tell you how many railings I’ve seen in new homes that become wobbly within the first year.) As well. the newel was screwed and glued from beneath the stairs.

I had to reposition a number of holes in the underside of the handrails and I created two more newels (not turned) for the first and second landings. 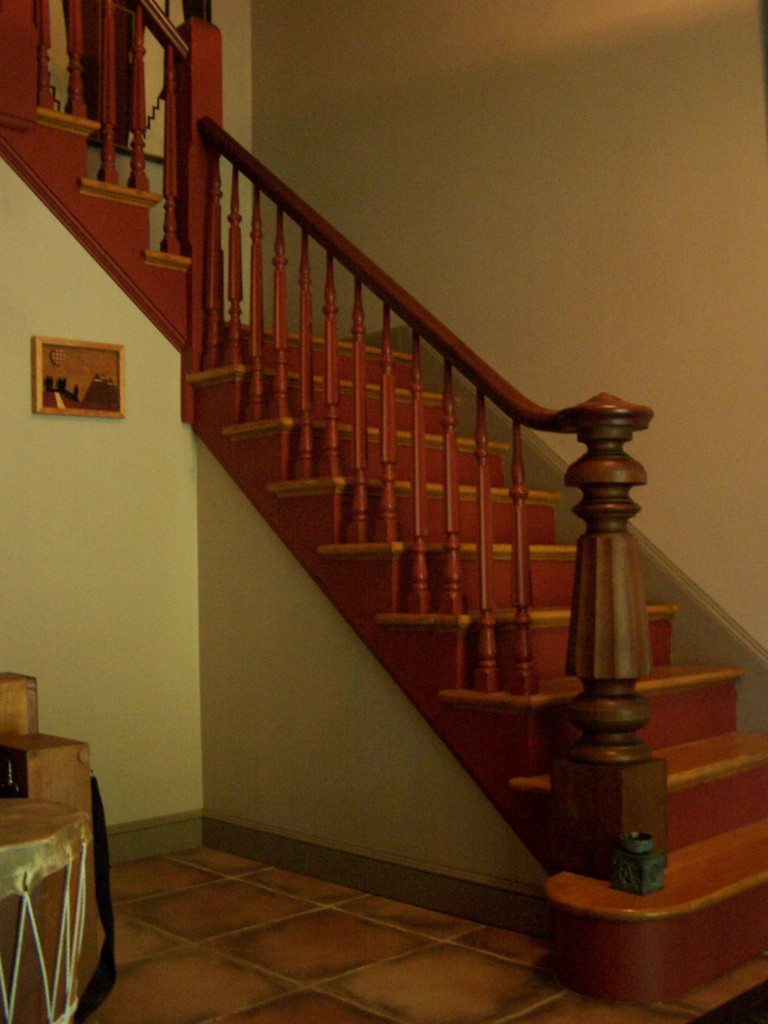 Now when you enter the front door of my home ( the foyer), the staircase is handsome, substantial in girth and very solid. Makes the whole house look better.