This small room (13X13′) in my home was to be the family library, TV/stereo  room and home office / computer center. I tore-out some 1960’s ‘modern cabs’ (when we bought the place) w/ over-lay, slab doors (yuck) and patched up that wall (left) for paint. I left the old paneling (on the right) in place because the cabs I made would cover that wall entirely. 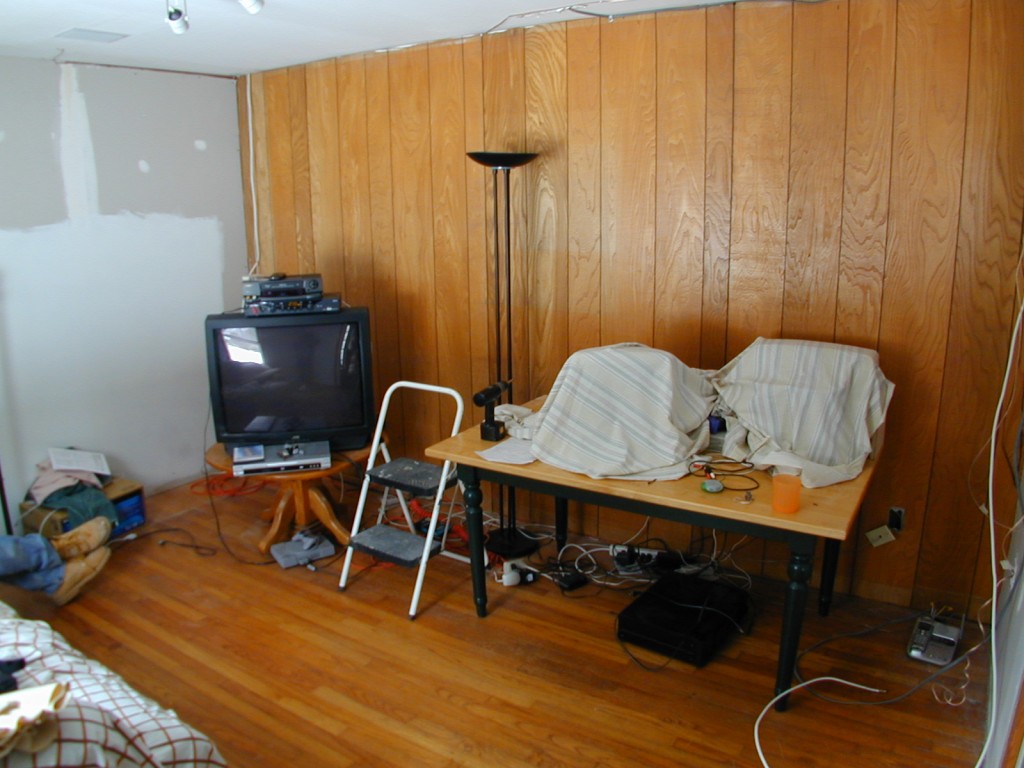 We knew we’d sit in one corner and the TV would sit in a cab in the opposite corner. I wired the ceiling track lights and mounted speakers (rear) in the ceiling and snaked the lines over to the wall and ran all other lines (cable , stereo and video from computer to TV/stereo equip. and ran everything over and through the new cabs. 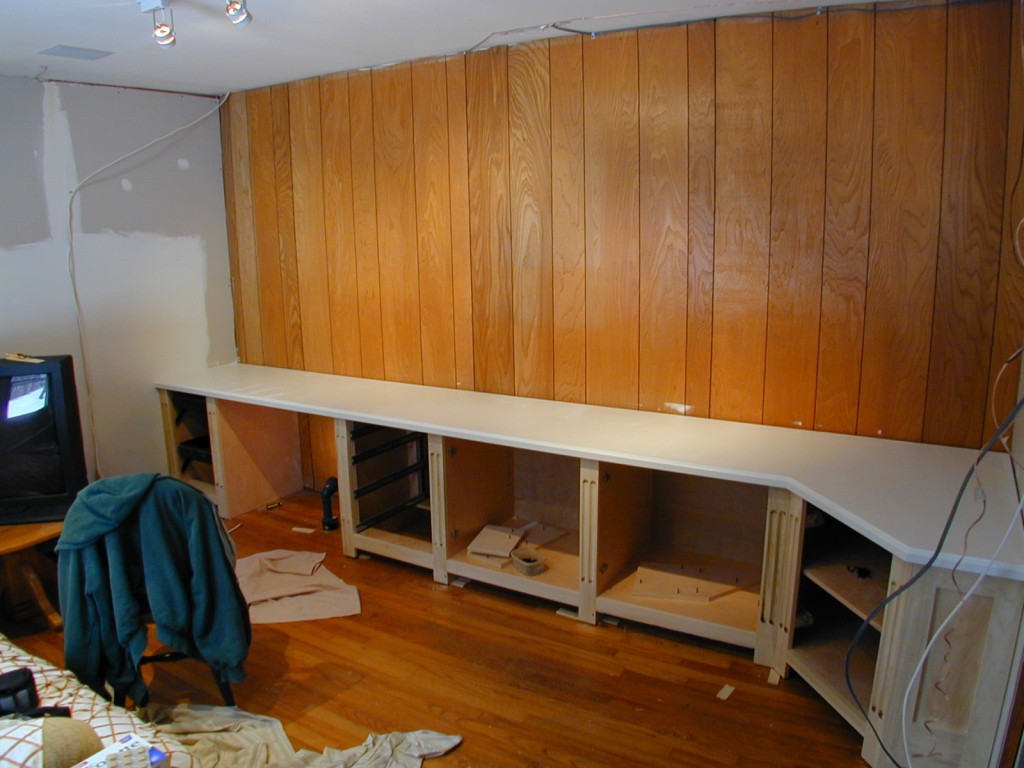 You can see a few stages of installation. The unit ends on the right where the corner cab houses the TV at a 45 degree diagonal to the room. 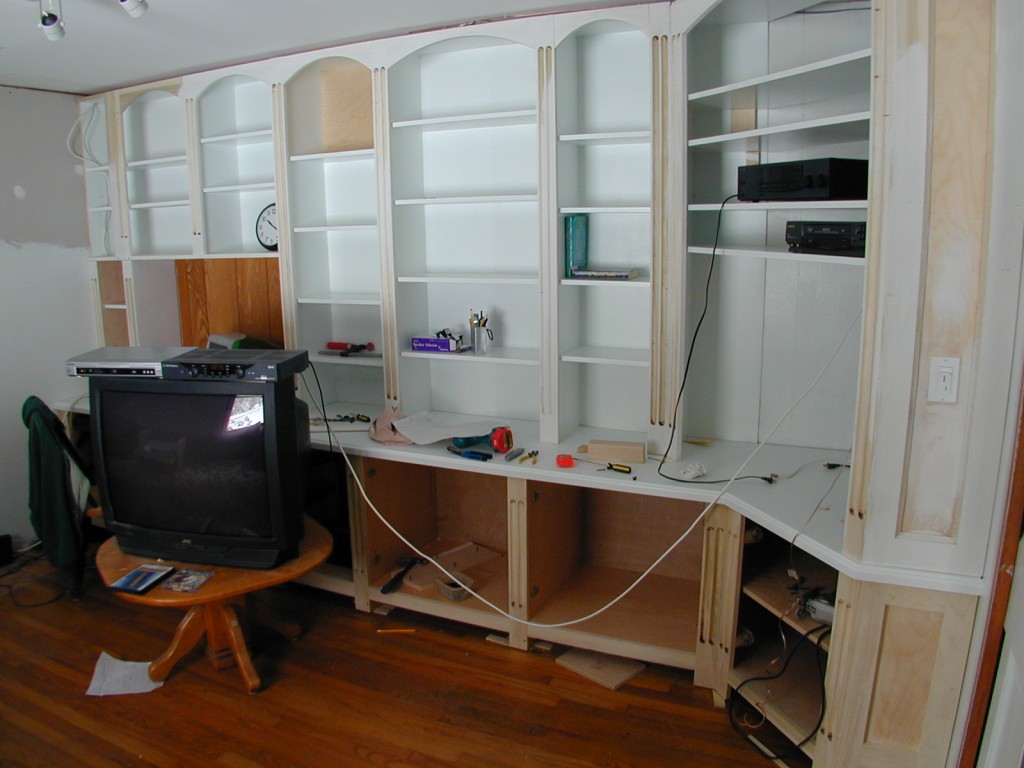 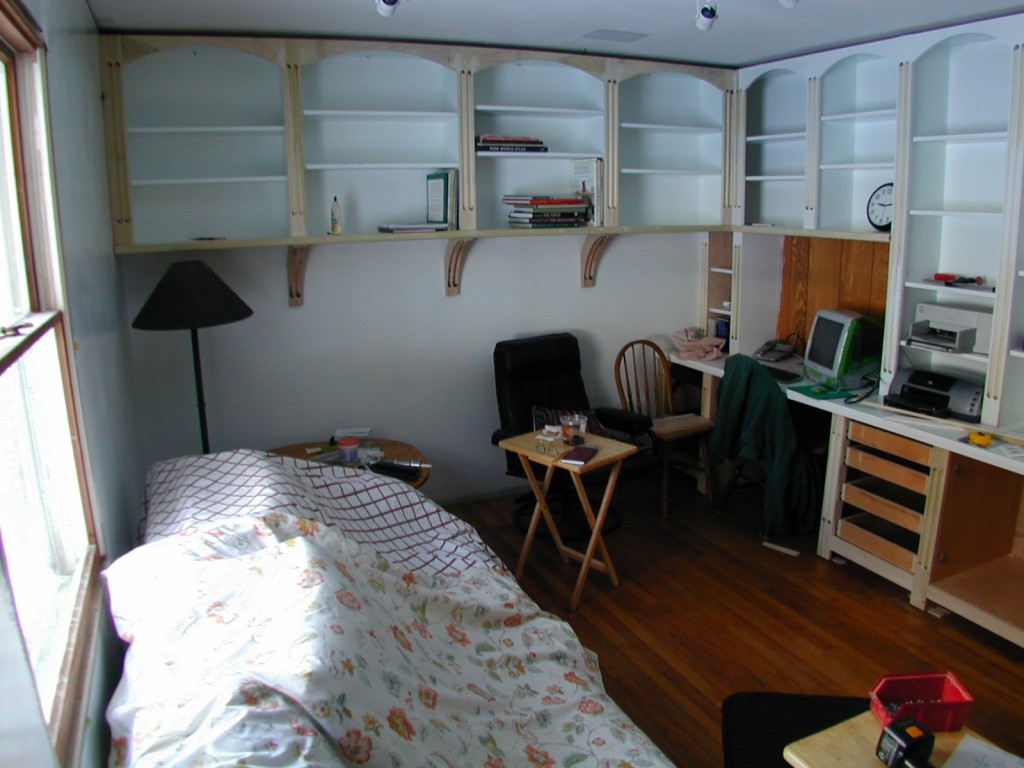 Because of space constraints, we needed additional library shelving on the same wall as the couch. I was afraid upper wall cabs would look too much like a kitchen so we created corbels (brackets) to make them a bit more ‘furniture like’. This made the uppers more sturdy anyway (what brackets were made for). 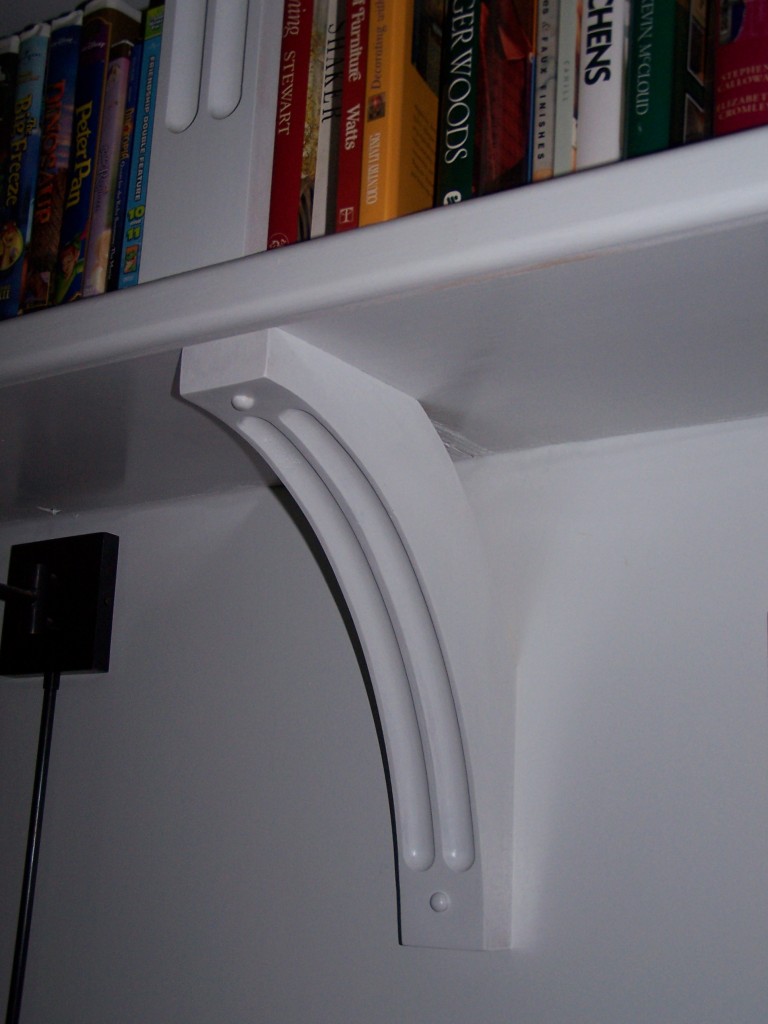 I experimented by designing my own stiles. also known as pilasters… that cut two, large grooves (flutes) along their length that  ‘stopped’ a few inches from each end. As you can see, I cut matching flutes in the corbels. 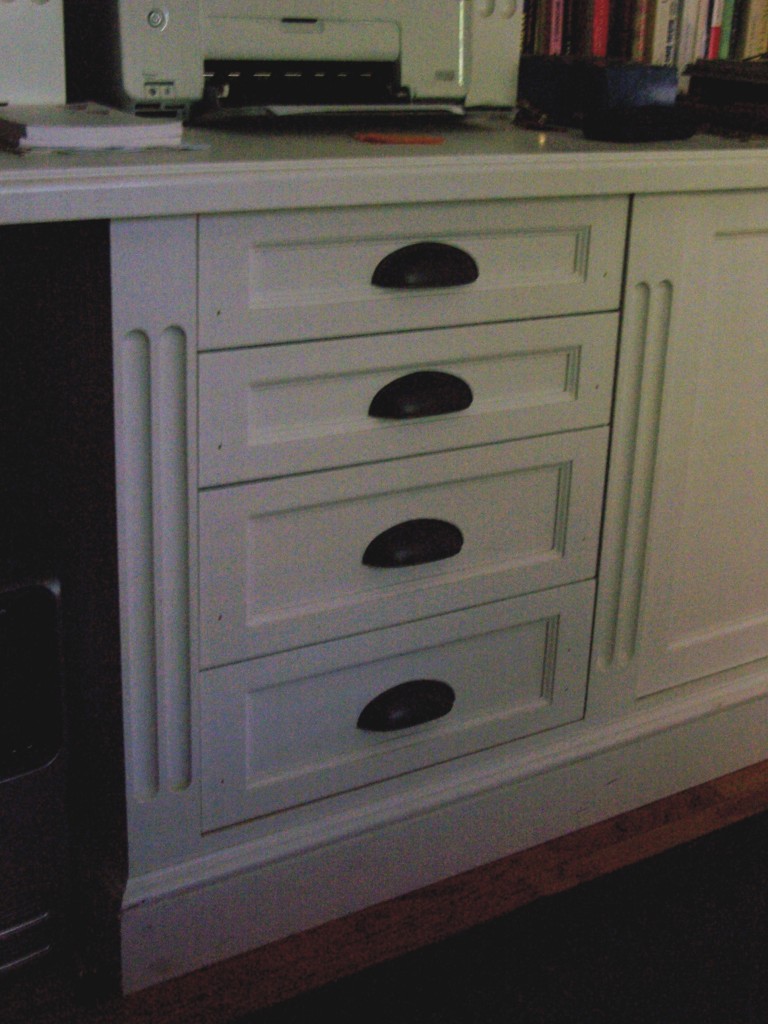 The room was so small I couldn’t get back far enough to get it’s whole width in a single shot. The wide shot you see was made by combining ( on photoshop) two shots taken on the same tripod aimed left then right /swiveled about 30 degrees. Tell me if you can see the line I used to ‘seamlessly’ join ‘them together. 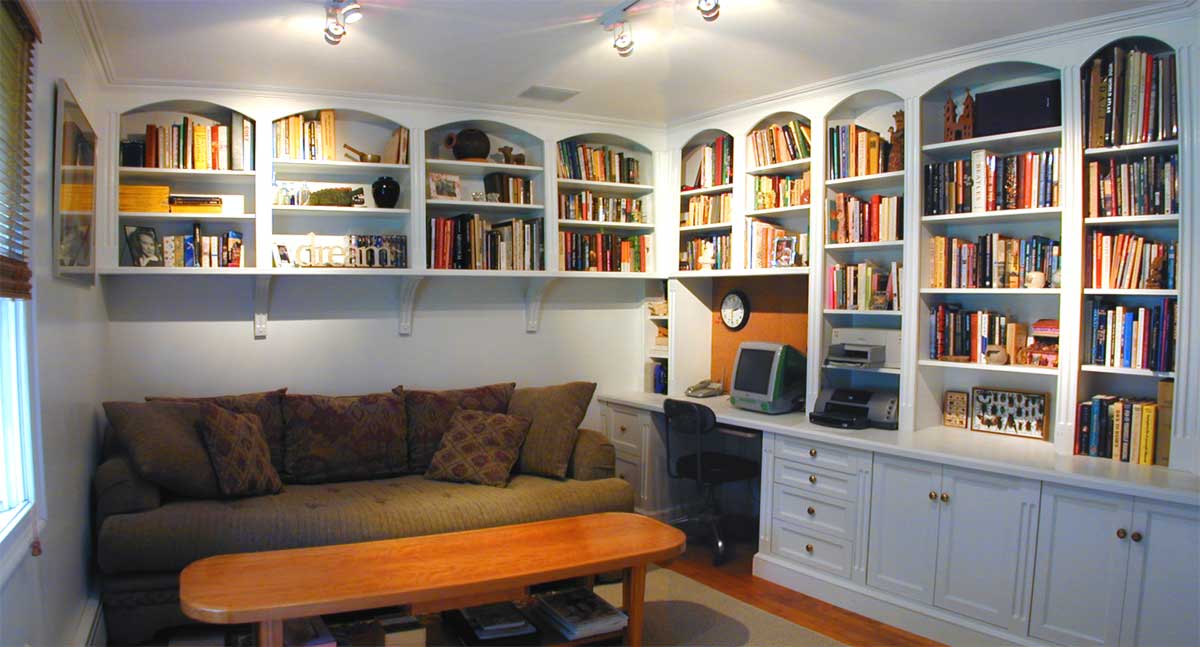 Here’s another shot showing the far right side. 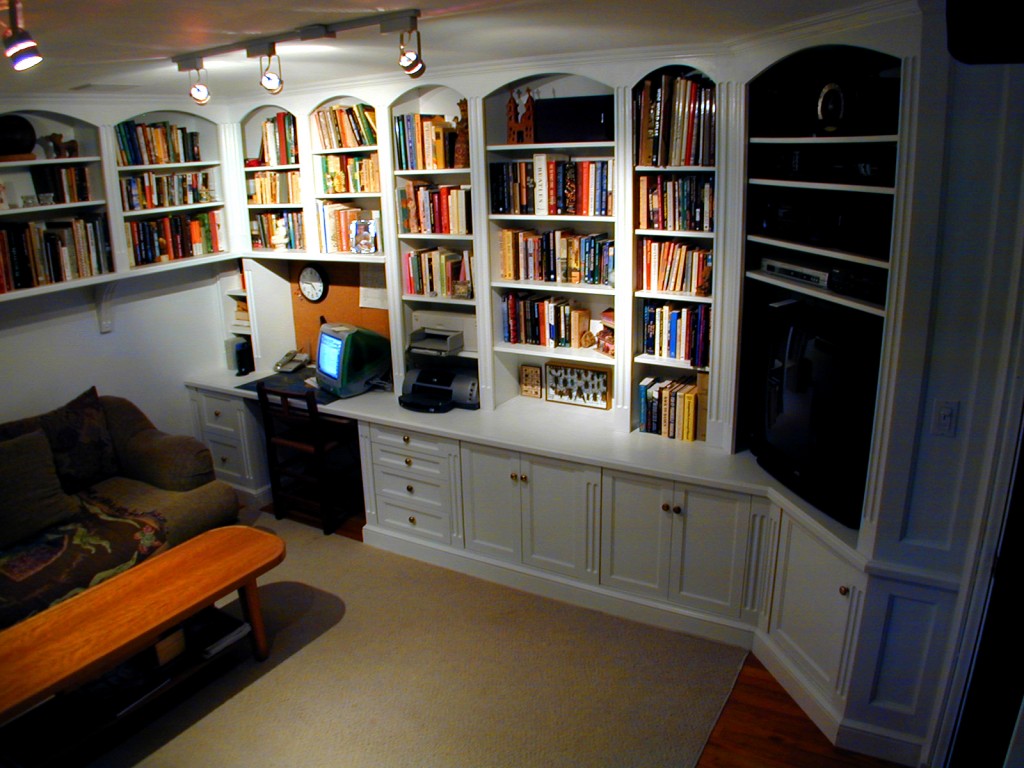 It’s seven years later and here’s a shot of what it looks like now (two couches to the left and much busier walls) …not the ‘dressed up’, simplified photo (above) we took right after it was built (for advertising, etc.). 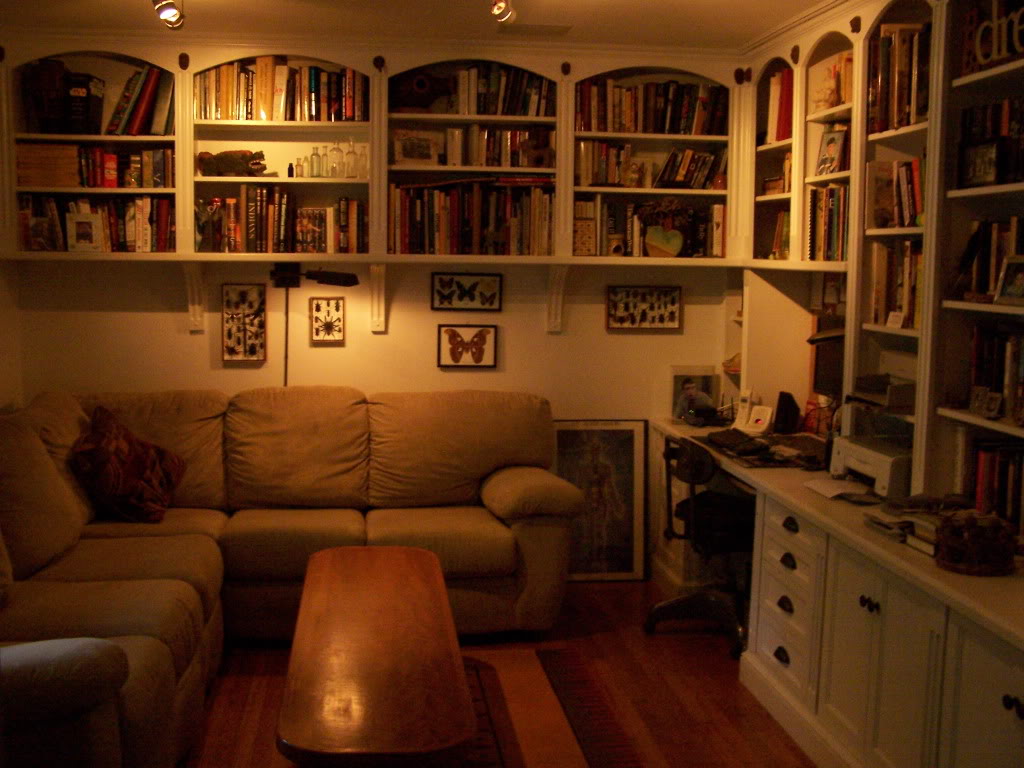 At night, we all like to hang out in this room now…